Romanians are always asking my honest opinion of Romania. When I tell them, they tell me I am wrong. Have I been to the mountains? The sea? The Danube? Yes, I've been to those places. I've seen the monasteries, the markets, the weddings, the pig sacrifices... I haven't seen it all. I've seen enough.

Romania is blessed by some beautiful geography. It is a beautiful country. But like the Romanians themselves say "Too bad it is inhabited."

When I'm ranting and raving about Romania, I'm not speaking of all of Romania. I am speaking of my life on the end of a dirty street amidst blocs, dogs and trash. I'm speaking about Iasi, in Moldova.

Transylvania is beautiful, so is Brasov, Cluj, Sibiu... There are many places in Romania that I would make home. 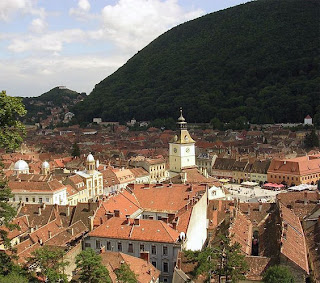 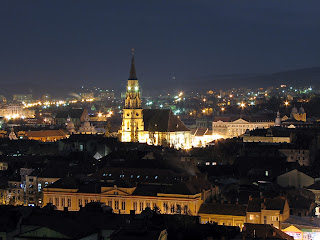 Cluj
The xenophobic, racist, homophobic and rude people of Iasi have not endeared themselves to me, nor has the city itself. Sure, there are exceptions. I have made friends in Iasi, but very few.
Posted by Fritz at 4:12 PM No comments:

I planted a nice lawn outside of my bar. I'm normally not obsessive about things, but there's something quintessentially American about a perfect green lawn that I take great pride in maintaining it.

My wife was talking with a customer who was upset by my "wasteful spending"but who appreciated the practicality of my lawn. My wife, puzzled, asked why he would think it was so expensive? The customer replied that only a lazy, rich, American would install artificial grass to keep from maintaining it.

I was later accused of the same thing by another customer. "Americans are always wasting money", I was told. The guy wanted to know how much I spent on the lawn. I told him I spent about 40 ron on grass seeds. "No, you can not trick me! I know you imported this lawn from Ireland!" He said he had spent some time in Ireland and had seen this grass there. I told him it was a possibility, but that this grass was common throughout the world.
"Look" I said, "In the neighbor's yard is growing the same kind of grass!"
"No, no, no... That is Romanian grass! See how tall it is! Your grass grows short and is all exactly the same height! Tell me! How much did you pay!?"
"You are right" I said "It cost me 2,000 ron...for a LAWNMOWER!"
Posted by Fritz at 3:56 PM No comments:

And your Indian name is George Custer Runningbear.

In prehistory, this beautiful land was inhabited by peoples known as the Thracians. The Thracians who lived in the area which is more or less modern Romanian were the Dacians, or who the Greeks called the Getae. 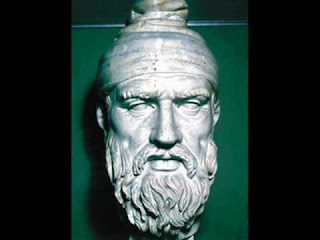 Ancient Dacian with Funny Hat.
They developed a society composed of agriculture, ceramics, metal-working, etc. Like many of the peoples in this region, they were more or less peaceful, having minor skirmishes with other tribes and also the occasional Celt, Sarmatian and Germanic tribes. Then one day, drunk on tuica, they decided to attack Rome. This made the Romans angry.
Emperor Trajan of Rome sent many armies against the Dacians and by 105 AD, the Roman armies had defeated their enemies and razed their capital of Sarmizegethusa. Trajan didn't much care for the Dacians
When the Dacian lands became part of the Roman Empire it was colonized by Roman citizens that were refered to as  "ex toto orbe romano" or, citizens from the regions controlled by Rome, such as the Arabic peninsula and even Northern Africa. 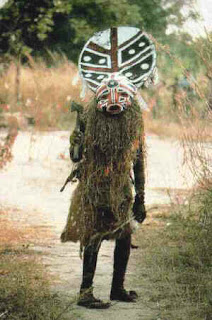 Citizen of Rome that helped colonize the Dacian kingdom.
So what do you do when your country is invaded by foreigners that execute a genocidal policy against your people and give your lands and women to other foreigners?
You call yourself a Roman.
That's correct. In Romania, names like Tiberius, Cesar, and even the man himself, Trajan are common. Even the name for this country "Romania" was chosen because they want to celebrate the centuries of rape and pillage carried out by the Roman Empire and to show their ties to the Italian peninsula, where even today they are despised and spit on by modern Italians.
Not that I have a problem with any of this...except that Romanians are very upset that the gypsies or "tsigani" refer to themselves as the Roma people. According to Romanians, this unfairly implies that the Roma are somehow connected historically to the Romanians who perceive themselves as being somehow connected to the Roman empire.
Posted by Fritz at 11:16 AM 2 comments:

Schindler's List. One of the greatest movies ever made.

When I first moved to Romania, I had been here a couple of months and had made a couple of friends here. There was one young businessman I used to get along with quite well. He spoke very good English, was funny, bright, etc. Refreshing compared the old communists and peasants in their funny hats.
I was speaking to him and his friend one day and they were talking about how their businesses were going slow and that the weather was depressing and that the best solution was to go home and watch "Schindler's List" again. "Why in the world would you want to watch such a depressing movie if you are already depressed?" I asked. "I love that movie" my friend said "it really cheers me up. The way it shows the killing of the Jews is depicted is so real, it's perfect." His friend chimed in "Yes! I love it. In the morning when I wake up, I have my coffee and wish I could be that German officer at the concentration camp! You know, the one with the sniper rifle who kills a random Jew every day! That's great! I wish I could start my day like that!" Yes, "Schindler's List" is a great movie because of the accurate depiction of the brutality of the Holocaust. I thought it had something to do with one man, doing whatever he could to save his fellow human beings.

So that brings me to another story. The one about the "Skeleton under the bed."

This is when I have to tell you for legal reasons, having to do with a document I was politely asked to sign by the local police, denying any of this to be true, that indeed, this story is for entertainment purposes only.

I was at a party once with some newly graduated doctors and some med students. They were having a good time and one of them mentioned her "skeleton under the bed" and what would she do with it now that she had graduated. They all chuckled at this inside joke and one woman said she simply had thrown hers in the trash after she had graduated. Another young doctor laughed and said he still has his in a box in his hallway.

Naturally perplexed I asked if they were joking. They told me no, that the old professors at the medical university required students to purchase a skeleton as a study aid and that every good doctor should have one, "just like in the old movies."

Vaguely having an idea of the price of skeleton models and knowing that Romanian college kids aren't exactly loaded, I asked how did they come up with the money to buy them? I was told that they weren't very expensive at all, only about $40 US. "Really? Are they subsidized by the state or something?" "No" I was told. "Human skeletons can be purchased easily in Iasi. They are from the Jews."

At that time, a medical student could simply go to a small village outside of Iasi, where the bodies of those from the "Iasi Death Train" ended its trip and ask the local caretaker of the Jewish cemetery for a a skeleton and he would dig it up, "clean it up" and sell it for a small fee.

Now, if any of this story had been true, I would have immediately alerted every agency even remotely interested in a story like this...but since after being interrogated by the police and signing a document saying that this never happened, I didn't do that.

http://www.haaretz.com/jewish-world/news/romania-students-suspected-of-buying-bones-from-holocaust-era-mass-grave-1.279126
Posted by Fritz at 11:06 AM No comments:

It could have been worse:

http://www.telegraph.co.uk/news/worldnews/1540135/Stressed-doctor-cuts-off-patients-penis.html
Posted by Fritz at 4:47 AM No comments:

That time I fucked up my knee.

I was standing on the sidewalk, smoking a cigarette and I noticed a car stalled out in the intersection. The dad was behind the wheel and a scrawny kid of about ten years old was trying to push-start it. Of course, Romanians, ever helpful were laughing and pointing at the spectacle. So, I went over and helped the kid push the car. I blew out my knee.

This was back when my health coverage had lapsed, so I was basically screwed. Fortunately, my father-in-law had a friend who worked at the local ER and gave him some cash to take a look at my knee. 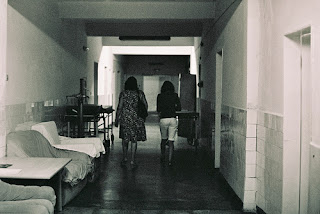 Yep, just this cheerful.
Upon arriving at the ER, the first thing that caught my attention was the crowd of patients outside, still in their gowns, smoking and chatting. I thought that was a little odd, but even odder were the nurses feeding stray dogs at the reception desk. 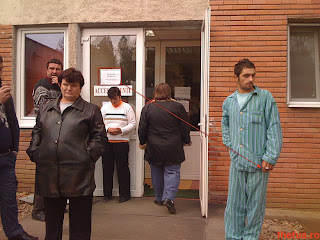 Patient smoking outside of hospital.

First I was put in a bed and given an I.V. of something. No examination, no questions, tests or x-rays.

Me: "Yes, I was pushing a car and immediately felt a sharp pain that will not subside and makes it difficult to walk."

Doc: "Aha! You see what is happening? Every time you smoke a cigarette, the smoke is attracted to the weakest point of your body. In this case, your knee. The cigarette smoke is destroying your knee, only by quitting will the pain subside."

Me: "Thank you, Doctor, that is very enlightening."

Then the doctor pulls my wife aside and says to her in Romanian "Your husband is an American? He has probably eaten McDonald's in his life. This is why his knee hurts. Because of the fast-food in America."

I was having a conversation with a young lady who was just graduating med school here in Iasi. She was telling me that she wasn't feeling well because of some severe menstrual cramps. I suggest to her that she trying lying down in different positions to give her muscles that were under stress a break. She told me with confidence that muscles were not the cause of menstrual cramps. The problem was "the blood vessels grow into your uterus like the roots of a tree. The pain is caused when these blood vessels break."

I was also enlightened about another aspect of Romanian reproduction recently. My wife finally decided to get a vision exam to see if she needed glasses. When the optometrist told her that yes, she did need glasses. My wife was a little upset. Why? Because it meant she could never have a natural birth. 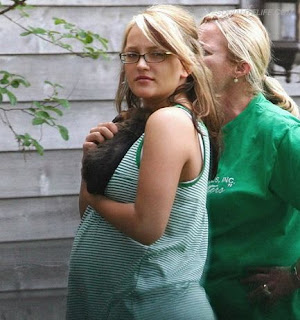 No baby for you!
Seems in Romania, a doctor will not allow a woman who wears corrective lenses to have a natural birth. Why? Because there's too great a risk to the mother that while pushing out the baby, her eyes may pop out of her head. I'm not making this up.
Posted by Fritz at 4:37 AM No comments: 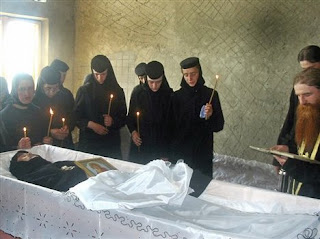 This is even better because it has Jews AND Gypsies!

More Romanian-Jewish stuff, because Romanians hate Jews so much.

Romanians as themselves. (I can't make this up.)